Walk With the Dinosaurs at Dinosaur Ridge

100 million years ago, Colorado’s front range was home to a coastal beach where dinosaurs roamed, leaving footprints that have been preserved in stone at Morrison’s Dinosaur Ridge. This beach opened to an ancient sea that stretched across the vast area that we now know as the great plains. 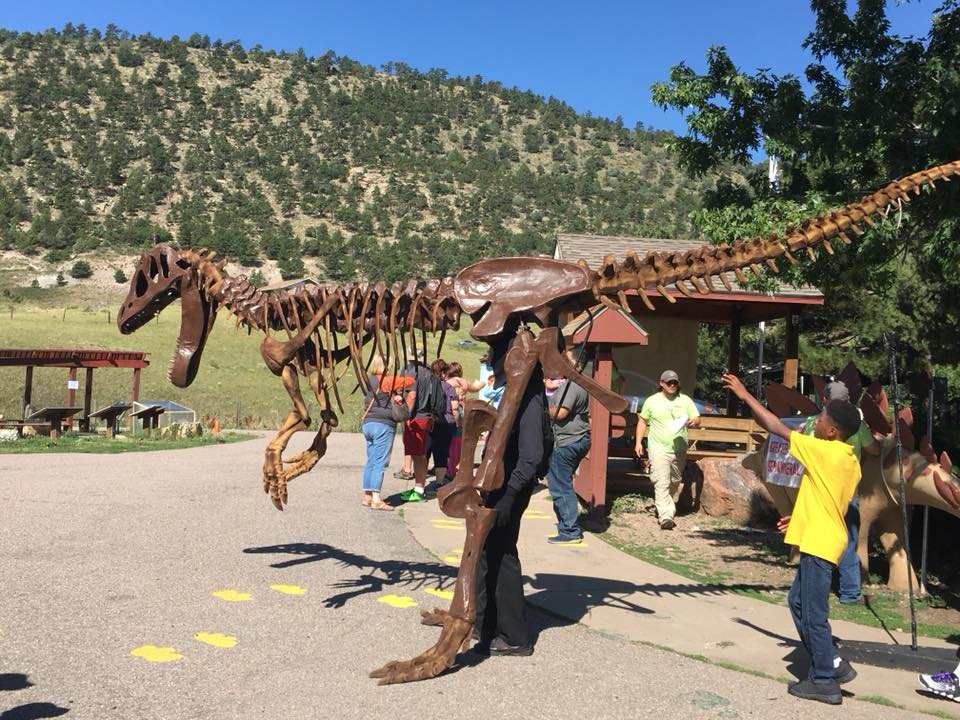 Dinosaur Ridge is famous for having over 300 dinosaur tracks in plain view. In addition to the famous dinosaur tracks, visitors have the chance to see dozens of dinosaur bones from the Jurassic period, still nestled in the layers of sandstone along the trail. As you walk the path, you will be taken back into the ancient realm of the dinosaurs. 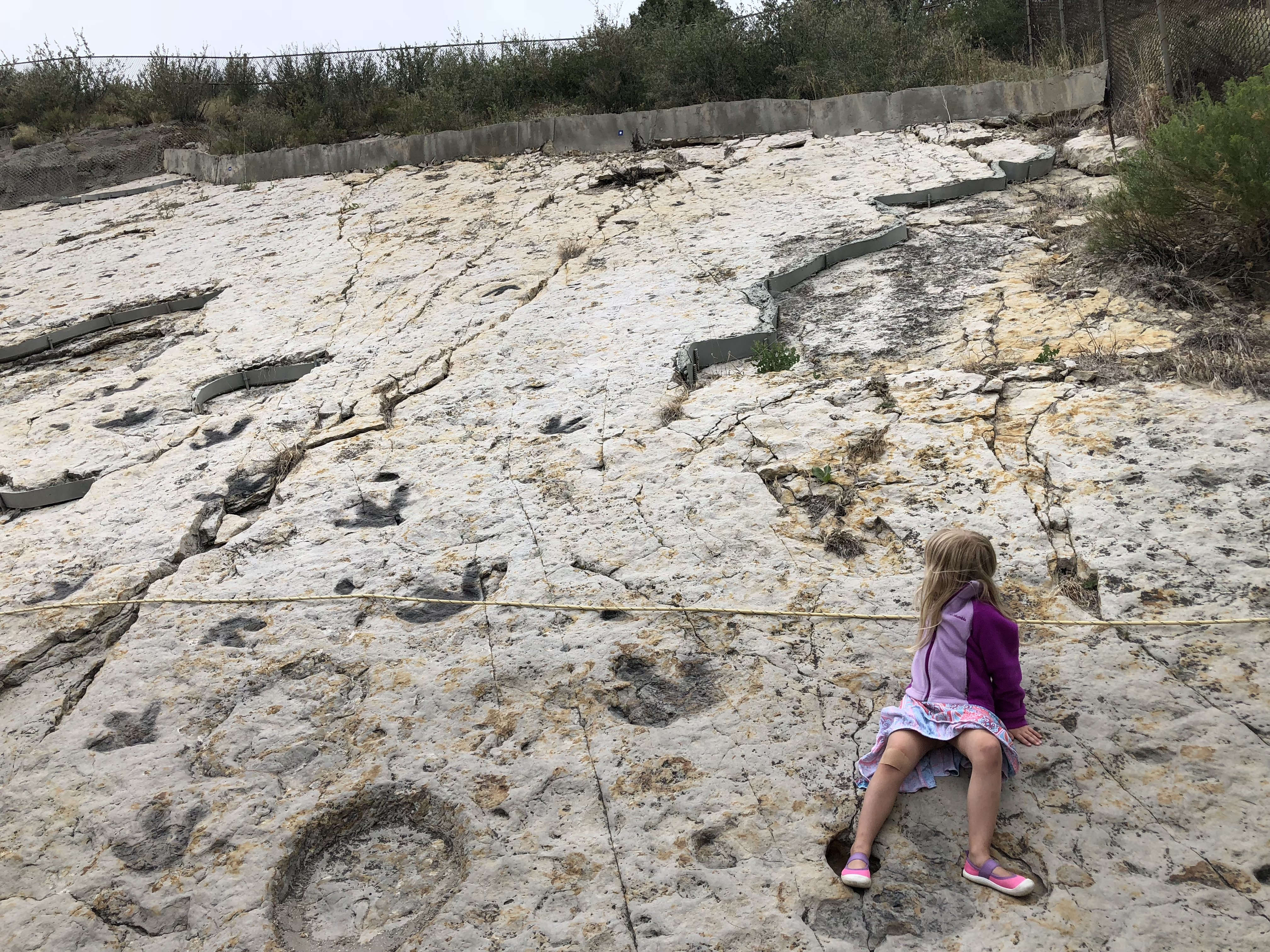 These beautifully preserved footprints are the tracks of duck-billed herbivores and ostrich-like carnivorous dinosaurs from the Early Cretaceous Period. 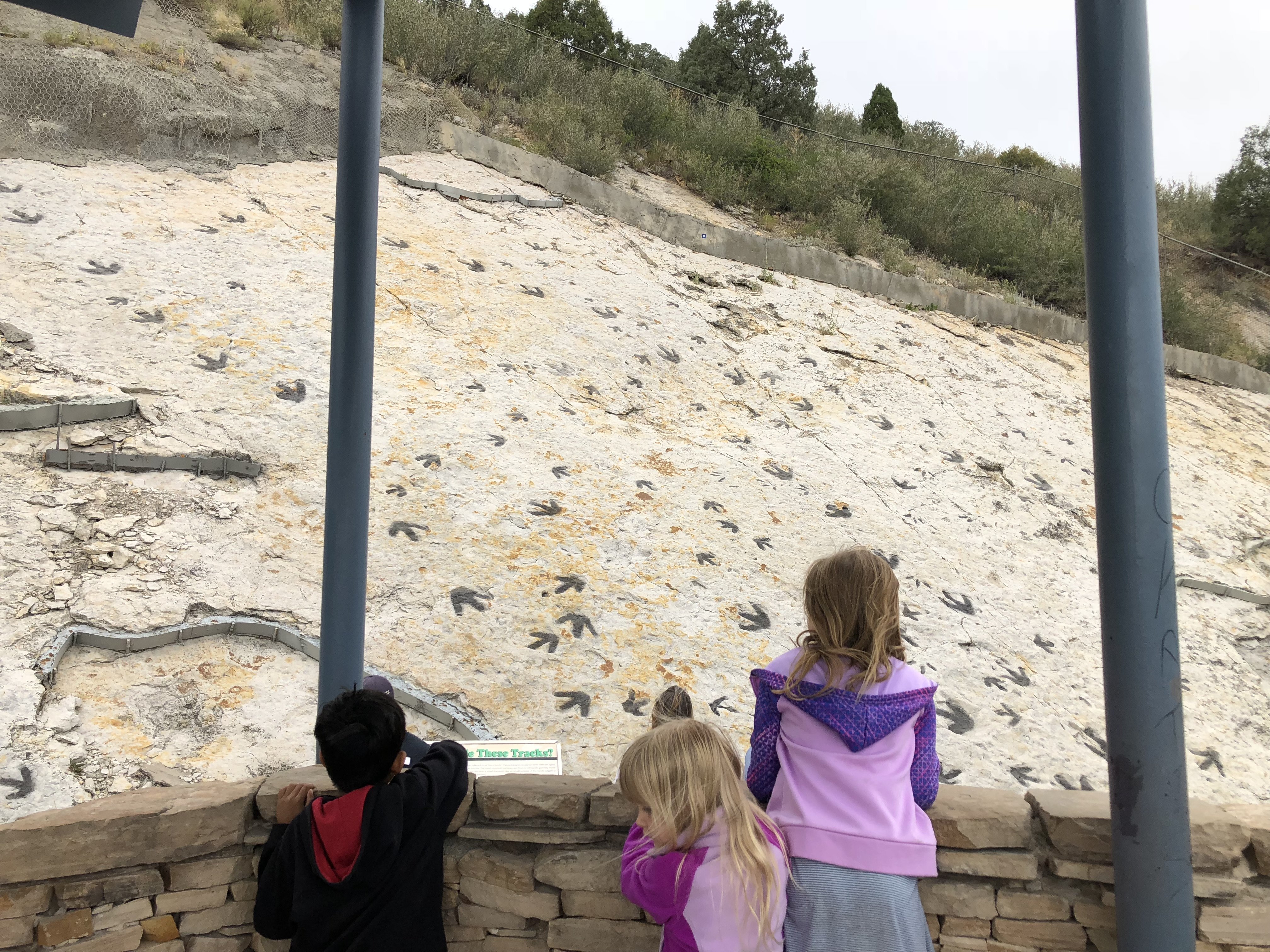 In addition to the dinosaur tracks, visitors can discover the monstrous foot depressions of sauropods, commonly known as brontosaurus. These preserved footprints, called dinosaur bulges (below), are left from these giants of the Jurassic period. 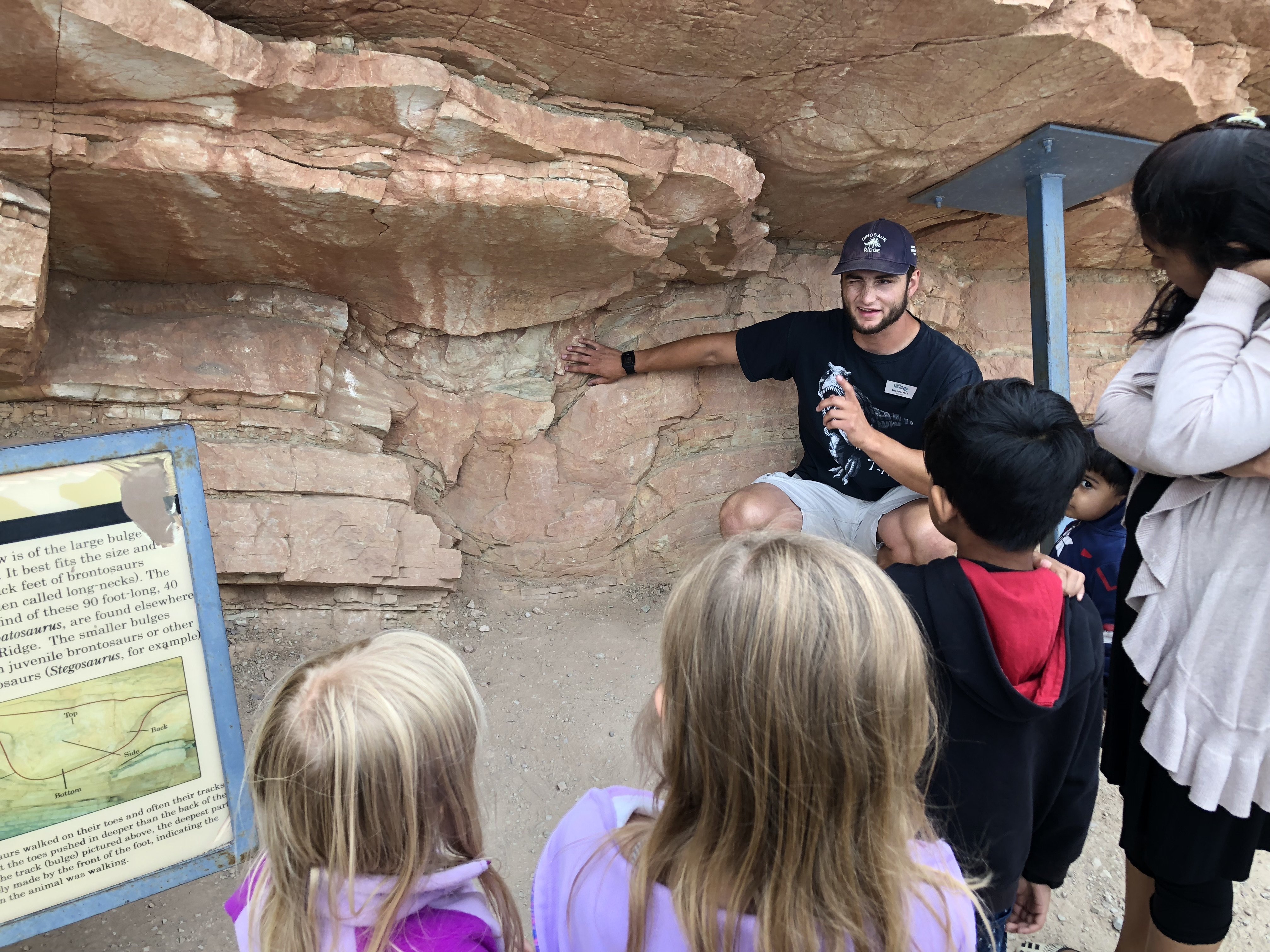 To join a guided tour of the ridge, purchase tickets for the shuttle bus! The cost of the bus is well worth learning about Dinosaur Ridge’s fascinating history. The shuttle bus tour is 45 minutes round trip, $9/adults 12+, and $7/youth ages 3 – 11. To view the dinosaur tracks for FREE, simply take a walk (or ride your bike!) up the trail. The road is paved and is stroller-friendly. The full length of the trail is about two miles. 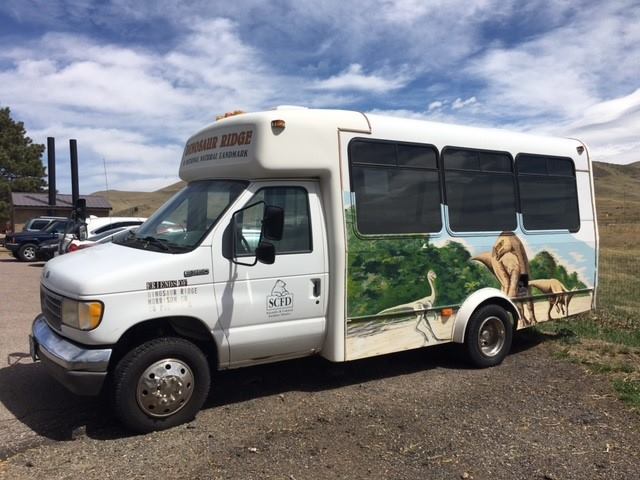 Did you know that Colorado’s state fossil is the Stegosaurus? The first stegosaurus EVER discovered was in Colorado in 1877, by Arthur Lakes, right here at Dinosaur Ridge. In the photo below, our tour guide shows us the fossil of a stegosaurus tail spike. 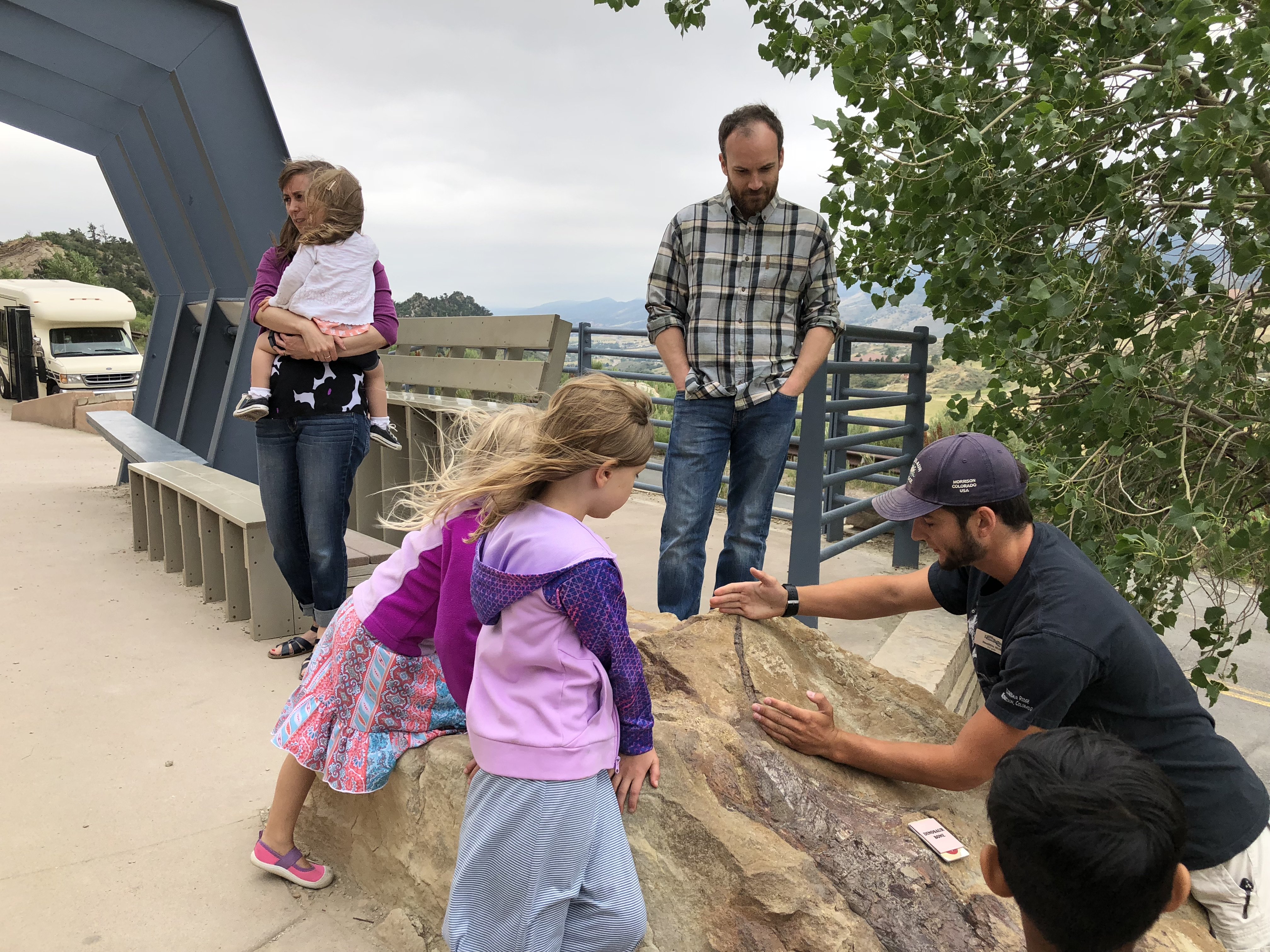 Round out your adventure by checking out the Visitor’s Center and Discovery Center to explore Colorado’s changing landscape over the Jurassic and Cretaceous periods with numerous fossil displays, hands-on dinosaur exhibits, kids dig areas, and more. 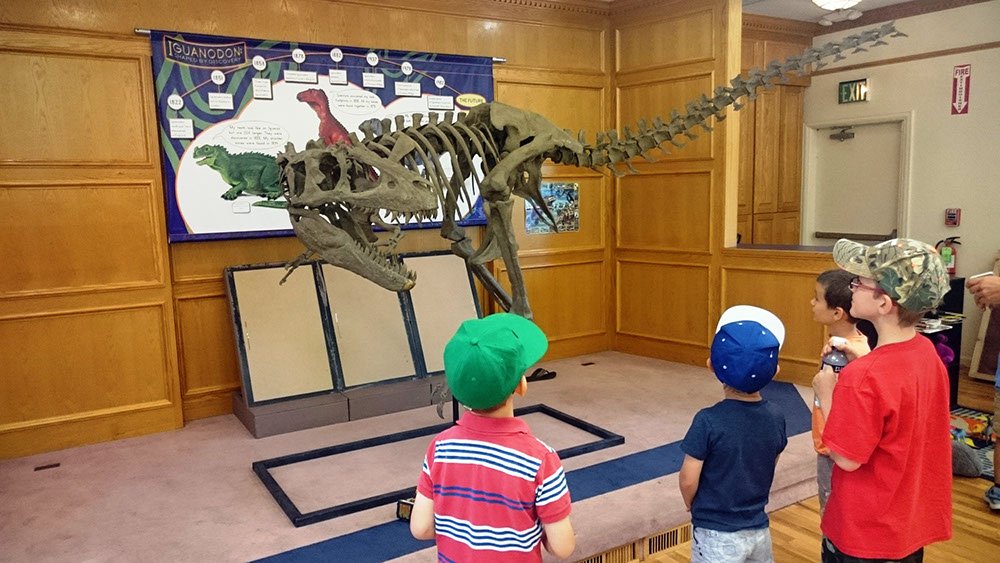 Colorado is packed with fun dinosaur discoveries, museums, and adventures! Click here for ten of Colorado’s best places to explore dinosaurs and fossils.

A self-guided walk of Dinosaur Ridge is FREE. For admission to the exhibit halls, the Discovery Center, and a 45-minute guided bus tour,  click here. Dinosaur Ridge is located at 16831 W Alameda Pkwy, Morrison, CO 80465.

Where to Visit with Santa Near Boulder

Experience Holiday Magic in the Mountains at YMCA...

Apps that all Boulderites (and Denverites) Need